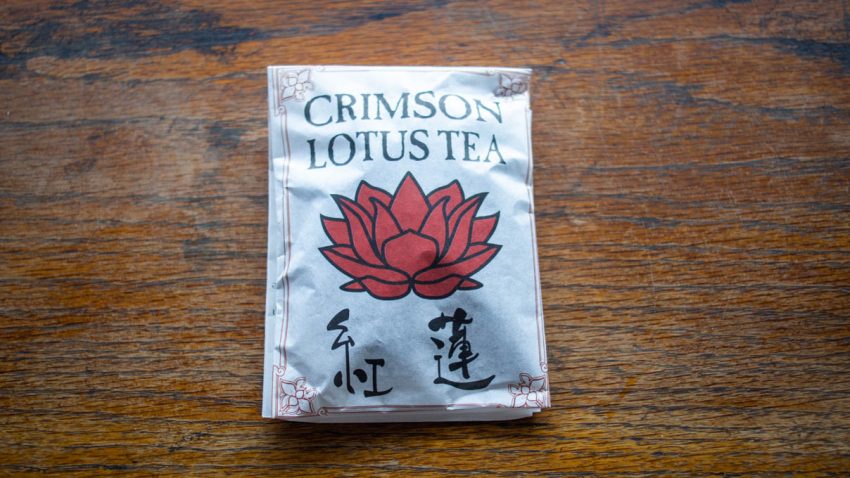 Crimson Lotus Tea’s 2019 Altered State is a new sheng puerh that has been blended for maximum Cha Qi. For those unaware of what “Cha Qi” is, simply put it is the “energy” of the tea. Beyond that, getting a solid answer on what it’s affects are really depends on who you talk to and what the tea is. It can be a calm and meditative state, or an uplifting rush, or a punch drunk feeling, or something entirely else. In other words, it can mean a whole lot of things to a whole lot of people. If you’ve been following along with my reviews, you may have noticed that I’ve never once commented on Qi and there are two reasons for that. The first is that it’s such a subjective thing that I would rather not comment on it. Taste already varies so much person to person, so with my reviews I want to focus in on as many tangible and objective notes as I can without any (or at least not too much) flowery language that may or may not apply to somebody else drinking the tea. The other reason I’ve never commented on Qi is simple – I’ve never noticed it. I’ve drank a few teas that other people claim have huge energy and noticed absolutely no effect on me, outside of maybe a bit of a caffeine buzz. There could be many factors involved in why Qi seems to jive with me, but I think it would be safe to say I’m just not all that in tune with such things.

So, with all that said, seeing this tea go up on the Crimson Lotus site piqued my interest. I’m very curious to see if I notice anything here, but at the end of the day my decision to purchase more or not will likely come down to how the tea tastes to me.

Note before getting into the review: Crimson Lotus currently has a contest on to win this cake! Click on this link for details.

The dry leaves have a strong smell of herbs, dry earth and a bit of bright fruit. As always, it’s a bit hard to tell for sure from a sample but this seems to me to be more tightly compressed than normal from Crimson Lotus. After a short rinse the leaves take on a very sweet aroma with a fresh berry scent. It’s unlike any other sheng in my memory – it’s very clearly berry and I’m leaning towards blueberry and raspberry, but can’t pin it down for sure.

For this session I am using my standard young sheng parameters. 3.8 grams of tea in my 55ml gaiwan, 90C water, and infusion times starting at five seconds and increasing by five each additional steeping.

Altered State is probably the strongest out of the gate sheng I have had so far! It hits you over the head with all the flavours all at once right off the first infusion. Honey sweetness, minty herbs, dark cherries, a bright berry note that lines up with the wet leaves aroma, long lasting sweet aftertaste and a thick mouthfeel. Despite having so much going on, nothing is muddled. You can easily focus in on each tasting note and pick them out one by one. Infusion two retains all the previous notes and adds in a bit of fresh grass and savoriness. The third infusion sees the cherry taste move more to the front, but everything remains powerful and in your face.

Infusions four through six don’t introduce any new tasting notes, only a an increase in broth-like mouthfeel. I haven’t noticed any increase in the overall power of the flavour since the third steeping. Altered State comes out strong, quickly ramps up, then plateaus and holds it’s strength. Honestly, it’s hard for me to picture this tea having any more depth to it or a stronger flavour anyway – it’s intense.

Around the eighth and ninth infusions the complexity in each individual steeping drops off. I am now getting one or two main tasting notes without much going on behind it, and each of these notes changes for each remaining steeping. Honey sweetness is up for every infusion though and very rarely I get sip with new notes of wood, minerals and some soil-like earthiness. The thirteenth infusion slams on the brakes and the session ends abruptly at the fourteenth.

So, has Altered State done anything to convert me to the ways of the Qi? Well… no. I tried to keep an open mind to it and came up blank. Due to my lack of Qi- perience in the past this isn’t surprising to me and I wouldn’t recommend you place any stock in my feelings here. But in every other aspect, Altered State is straight up bonkers. Flavour production is through the roof, mouthfeel is on point, it’s smooth with no harsh aspects at all, and while the aroma isn’t exactly at “fill the room” level, what’s there is beautiful. So steal one of my favourite metrics from TeaDB, I think this puerh could easily pass the “mom test.” It’s a cake I could see myself sharing, using it to introduce people to puerh, or giving to people who have had a negative experience in the past. Or, maybe I’ll buy a tong and horde it all to myself, protecting it like a dragon protects its gold… Both of these seem like great options to me.