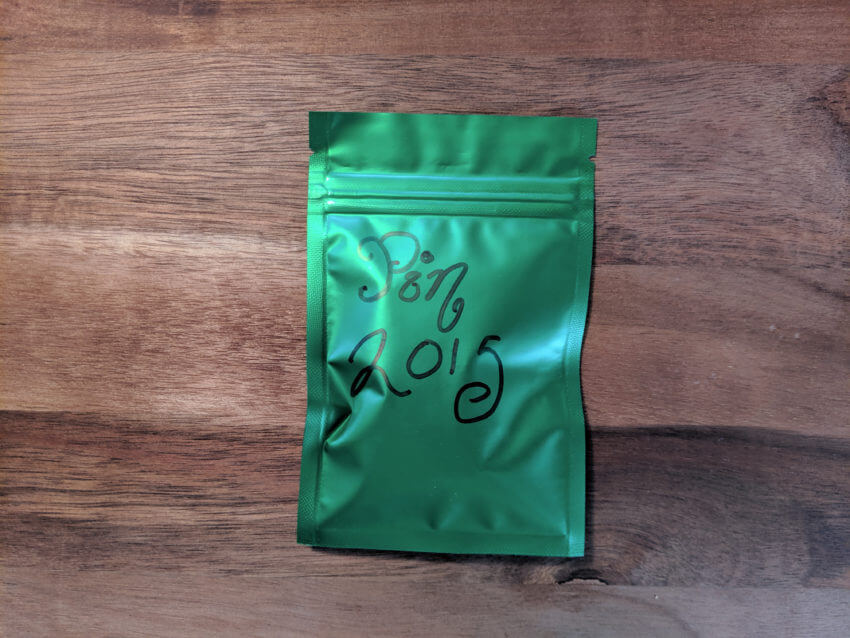 White2Tea’s 2015 Pin is a puerh that I have been interested in for a while. Right when I was getting into puerh, White2Tea had a sale on so I was asking on Reddit what was recommended and a tonne of people all said “Pin.” At the time, $70 was more than I wanted to drop on a cake so I took a pass on it and then got side tracked and never got around to ordering it. Recently an online tea friend sent me a box with a bunch of teas in it and I was pleasantly surprised to see Pin in it.

This cake is blended from 2013, 2014, and 2015 material. Like most of their cakes, White2Tea doesn’t give any real information on where it comes from but says that it has “Lincang character.”

It’s hard for me to judge the compression of this cake, but if I had to take a guess I would think it’s on the looser-medium side. There looks to be a wide range of leaves in here, of various colours and sizes. The dry leaves have a strong tobacco and hay aroma, which transforms into a bright fruity and fresh grass scent after a rinse.

I am using 3.7 grams of leaves in my 55ml gaiwan, 90°C water, and infusions starting at 5 seconds and increasing by 5 each time.

The first steep is deep and earthy, with some notes of moss, earth and tobacco, a light sweetness, and it has a syrupy texture. The second infusion includes all of these notes but it gets a little bit tart and slightly sour. The same goes for the third, but with some bitterness and astringency added in. The aftertaste is long lived but it’s less of a distinct taste and more of a smokey feeling that clings to the back of your throat.

I thought this tea was on a trajectory to just become a bitter, gut-rotting bomb but it took a pretty abrupt turn at the fourth infusion and smoothed right out. The texture has started to thin out, but the flavour is still full and shows no sign of slowing down. In addition to the earlier notes I am getting some fruitier tastes of plum and currant, and a hint of spice that I can’t put my finger on yet.

Again the tea is mellowing out and getting smoother, but the flavour remains full. I am getting more of a honey sweetness in these later steeps, and a pine taste shows up around the eighth infusion and grows for the rest of the session. The aftertaste starts getting astringent again, but in pretty moderate levels and is joined by a nice menthol-like effect. The spice note increased a little bit but never became too forward and disappeared by the tenth infusion. If I had to name it I would say pepper, but while it was strong enough to notice it never fully made itself known. I also got the occasional very bright and floral sip, but this reminded me more of a synthetic perfume than real flowers. I wasn’t a fan of that, but it was only the odd sip here and there.

This tea definitely has stamina to it and only started to fade out at the thirteenth infusion. I ended my session at the fifteenth infusion but haven’t dumped my leaves and will be coming back to it later in the day with some super long steepings.

I would say that Pin has lived up to the hype for me. I wasn’t really into the first few infusions and the next time I make it I’ll likely give it a double rinse, but once it gets into the meat of the session it’s definitely my jam. For many teas this would be a negative and put me off of it, but due to the length of the session I don’t feel like I’m missing out too much by discarding a few infusions. I think at the current price of $73 USD for a 200 gram cake it hits the value mark well of being a step up from the more affordable cakes but still being attainable.