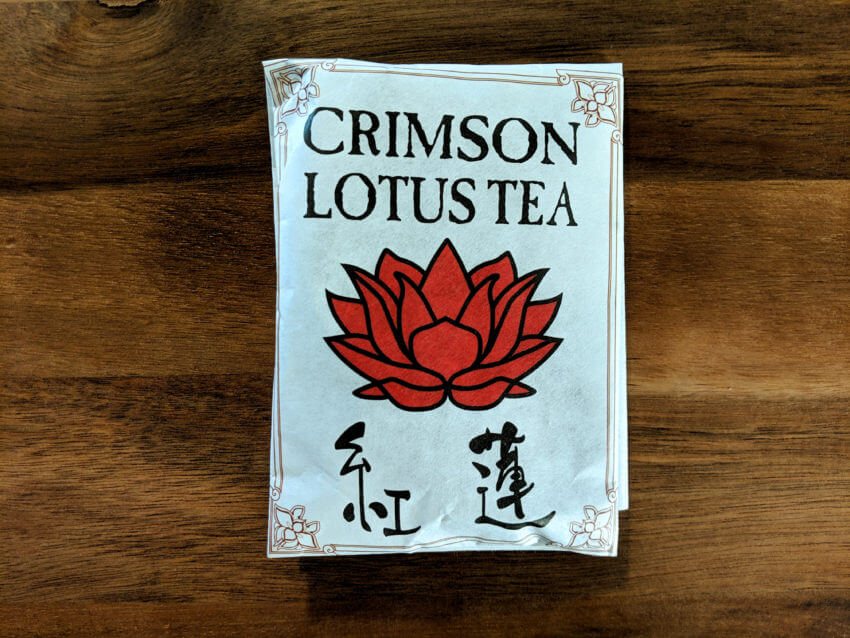 2018 Jingmai LOVE is a new pressing of Crimson Lotus Tea’s now sold out 2016 cake, which I reviewed a couple of weeks ago. As a quick recap, I really liked the 2016 cake and think it’s a fantastic puerh at the price. It started out vegetal and floral, with the floral qualities increasing throughout the session, has a nice clove taste in the background all the way through, and a melon taste for the middle infusions. While this new pressing was recently released, it is a 2018 pressing so it has almost a year of age on it already. Vendors holding onto a cake for a little bit before releasing it to the public is something that I’m a big fan of and would like to see more of.

Full disclosure before moving on – this was a free sample sent to me by Crimson Lotus Tea, but this isn’t a paid review or ad. I’ll be reviewing this tea just like I would any of my cakes that I’ve purchased.

I haven’t had too many samples from Crimson Lotus yet so I’m not sure if this is the norm, but I love that I got a nice chunk of the cake instead of the hard pressed beeng hole. Breaking apart the sample makes me think this is pressed like most of Crimson Lotus’ cakes, which is a light to medium press. The dry leaves have a strong honey sweetness, and a good earthy aroma. After a quick rinse the leaves are bright and fruity smelling with the main note I can pick out being apricot.

For this sessions I am using 3.75 grams of tea in my 55ml gaiwan, 90°C water, and my infusions start at five seconds and increase by five each time.

Like the 2016 pressing, the new 2018 comes out with a bang. No slow start with this tea, it’s full of flavour right off the first infusion. The profile of these two pressings seems quite different to me, though. This newer pressing is much darker in taste. I’m getting lots more of that clove spice flavour from the old cake but the taste is more dark fruits than brighter florals and there is absolutely no grassiness. I can’t quite put my finger on what the fruit taste is, but the closest thing I can compare it to is a dark ripe plum. While some shengs have an extremely distinct plum taste, this isn’t that – it’s just the closest thing I can relate it to. Like the older pressing again, the aftertaste is faint but long, with the main note being honey. No astringency or bitterness at all, this tea is smooth and easy.

Now this tea is becoming more familiar to me. While still faint at the beginning, the tea is starting to become more floral and I’m getting the same honeydew taste that I did around this same time from the older cake. The previously undefinable fruit taste is becoming more up front and is very clearly raisin. The aftertaste is increasing in length each infusion and by the sixth it’s gaining some astringency. The body is also increasing throughout this session, becoming more and more syrupy as time goes on. The floral qualities increase each steep and are pretty forward by the sixth infusion.

The low notes start to fade away as this tea transitions to the end of its life and the floral and clove notes really start to move up for infusions seven to ten. The honeydew notes are still in the background, but all the dark fruitiness is gone by the eighth infusion. At the ninth infusion most of the floral notes quickly drop off and you’re left with a very sweet honeydew taste with a hint of clove in the back. This too drops off and the flavour is mostly gone by the twelfth infusion, but I pushed it with a few long ones after as I was really enjoying it and didn’t want my session to end.

2018 Jingmai LOVE is a winner for me. It’s definitely in the same family as the older pressing, but you can look at it like the younger brother who thinks he’s a little bit dark and brooding. Their mid sections are largely the same, and the real differences come in at the very beginning and the very end. Where the older cake starts out a bit grassy and vegetal, this one comes in with a darker fruitier taste. And while the old one fades out to a pure floral hit, the new one goes for a sweet melon finish. All the way through the 2018 cake has a stronger clove taste and is less bitter and astringent, although neither was particularly bitter. At $45 for a 200 gram cake I really think this puerh is a steal. It’s not a huge, face melting, complex session but it doesn’t need to be. It’s just all the way through a really nice and enjoyable drink.