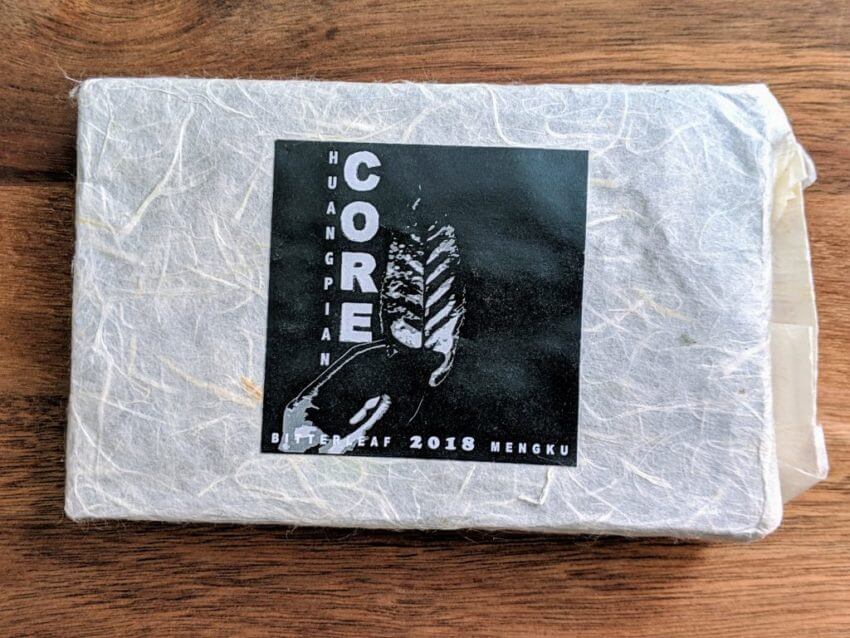 Bitterleaf Teas Core Huang Pian brick a sheng puerh made from huang pian material, which means “yellow leaves.” These are the older, uglier, larger, and generally undesirable looking leaves. For the customer this means a much cheaper end product, but these leaves also have a much different taste, often being smoother and sweeter than their younger and prettier counterparts. At ten cents a gram, the Core Huang Pian brick is really hard to pass up.

The brick is pretty tightly compressed, but still easy to get a good chunk off. The dry leaves have a faint, nondescript smell but the wet leaves have a pretty strong sweet, fruity aroma. The leaves broke up pretty quickly in my gaiwan by the third infusion.

It starts out pretty mellow, it’s sweet, with it’s main tasting note being apricot and raisin. There is a light floral taste, but not enough for me to call it a floral tea. The aftertaste is nice, but short lived.

The tea is remaining pretty light, I would recommend longer infusions rather than flash ones. Despite being a very affordable brick at ten cents per gram, it doesn’t have that classic “cheap sheng” taste. It has thickened up a bit by the sixth infusion, but the main note is still sweet raisin with not too much else going on.

More of the same, with some floral notes peaking out and a bit of earthiness, but mainly it’s just that same sweet raisin taste. I gave an accidental five minute(ish) infusion and it still came out pretty nice with only a touch of bitterness and astringency coming out, mostly just in the aftertaste.

Overall, Bitterleaf Teas Core Huang Pian is another great daily drinker. Smooth and easy going, no off notes or anything to be upset about. After my accidental long steep I was thinking this would be a decent puer to drink grandpa style, but I haven’t tried it yet. The only downside is that it’s a bit one dimensional, but at the price that is just a comment and not a complaint. I’m totally happy drinking this tea and won’t feel badly if I burn though it quickly.