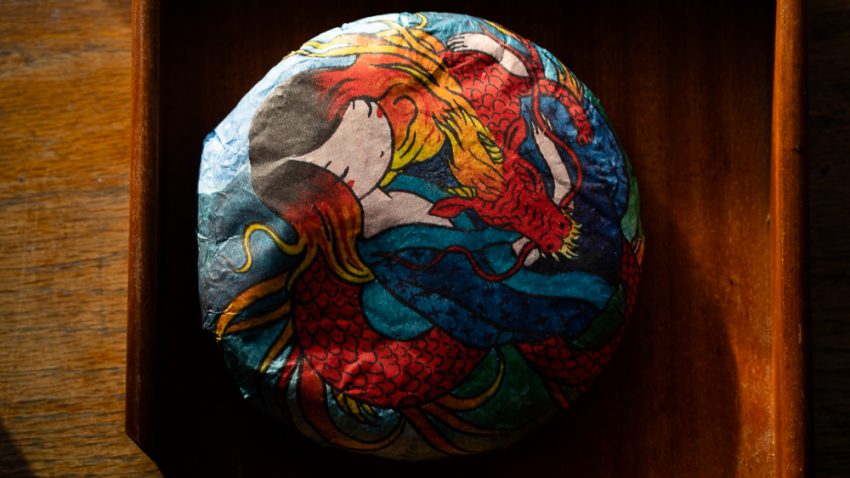 Good morning! Today I am drinking Crimson Lotus Tea’s 2020 Baby Dragon sheng puerh. This tea is made with the same base material as their Slumbering Dragon puerh, but instead of being a single origin sheng, it’s blended to “harnesses the Slumbering Dragon essence and energy but is more approachable and affordable.” I’m a big fan of Slumbering Dragon so I grabbed a cake of this rather quickly when it came out to see how it stacks up.

Baby Dragon is pressed loosely, after poking it once or twice with my pick I can easily grab a chunk off with my hand, at which point it mostly falls apart. There is almost no aroma to the dry leaves, but I remember it being strong last time I drank it, so I might chalk this up to my storage. We didn’t have a very cold winter this year but it was one of the driest on record and I was constantly fighting with my pumidor to keep my teas happy. After a quick rinse the fragrance is sharp, bright, full and fruity. It’s an undefinable red fruit scent in the realm of an under-ripe plum, but it’s just in that family – not a clear plum smell.

For this session I am using 90C water, 5.6 grams of tea in my 85ml pot. After a quick rinse, I start with a loose five second infusion, followed by loose ten, then increase by five seconds each additional steeping. I say loose because I’m brewing with a pot today instead of my normal gaiwan, and the pour time is close to four seconds, so timing is a bit funky for short infusions.

Baby Dragon is strong and demands your attention right off the first infusion. Up front it’s dark and slightly tobacco-y with a vague spice note. Once you swallow there is a quick sweetness followed by a light bite of bitterness and astringency that hits you in the teeth, then back to a sweet fruitiness that stays with you a long time.

The second infusion is significantly brighter now, with the fruitiness from the aftertaste moving forward and overtaking the tobacco flavour. My second sip once the liquor has cooled a bit has a big increase in bitterness, with a Lao Man E-esq taste, but much more palatable.

Bitterness and astringency take centre stage for the third infusion, overtaking everything else. This is definitely a Lao Man E taste to me, but again – toned way down from a LME cake. The bitterness is almost playful, pushing you to the edge of what’s enjoyable but never crossing the line into unfriendly territory. The spice note comes back a little bit every now and again, but it’s not well defined or something I can pick out, it’s just a little layer that gives depth.

While the bitterness is still at play for the fourth steeping, it comes in and out from sip to sip. When it’s present it takes over from all other tasting notes, and when it’s not the flavour is largely bright sheng fruit and white sugar sweetness. I would have expected the mouthfeel to have filled out a bit by now but it hasn’t, the body remains thin with an oily slickness. While I would appreciate a bit more thickness, it does leave a great coating around your mouth and throat.

Infusion five is similar but all around larger. I get a hint of a minty, herbaceous, medicinal thing every now and again but it never quite fights through to the front. The length of the aftertaste feels like it’s reaching its peak here, and it’s remarkable. I feel like I could stop my session, go eat a peanut butter sandwich, have a cup of coffee and probably still get a faint reminder of this tea. It just doesn’t quit.

Bitterness suddenly disappears at infusion seven but with it goes the bulk of flavour, we seem to have hit the cliff early today. Some sweetness, some fruitiness, not much else going on. Strong aftertaste remains though, and doesn’t show any sign of easing up.

I easily could have called it quits at the seventh infusion, the tea came on powerfully off the top then drops off just as quickly. I kept going until the tenth infusion because the aftertaste keeps giving, but besides that there isn’t much to report. I’d call it six and a half solid infusions.

This one is a bit hard for me to wrap up. If I was to judge this tea solely on this one session I would say it’s nice but probably wouldn’t buy it. However, this isn’t my first session with it, and I know Baby Dragon has much more to offer than I saw today. The main thing for me to note here is that in my experience, this puerh really comes to life when you give it a full boil. You get a bit more kick from the bitterness and astringency, but everything else gets amped up with it – way more flavour in general, deeper complexity, longer session. I did it a bit of a disservice by going with 90C water, but I did this because that’s how I like to do all my young sheng reviews at leas the first time to develop a baseline for comparisons.

The other thing that should be mentioned are comparisons to Slumbering Dragon. Slumbering Dragon is a single origin sheng puerh made from wild Kunlu Shan material, while Baby Dragon uses this material as a base and adds in other tea sourced from the surrounding area to give you the same general feel at a more affordable price – $70 USD for a 200g cake as opposed to $120. Looking back at my Slumbering Dragon review, it’s surprising to me how much of the essence they managed to capture with Baby Dragon at a fraction of the price. All the main notes are there and Baby leaves me wanting for nothing more. But I wouldn’t let this fool you into thinking one tea makes the other obsolete, or that it’s a poor-mans vs rich-mans Dragon situation. Baby Dragon is more on the mellow side and more approachable, dipping it’s toe into the harsher (but enjoyable) side of the sheng world, but with that comes less excitement. I could very easily see somebody loving one of these and disliking the other, or you could like both and and drink either at different times. The former is me – I’ve got a cake of both of these and regret neither purchase.

To me, these two notes really drive home the need to sample teas and also experiment with them before making up you mind. While this write up may not come off as ecstatic, I actually am a huge fan of this tea, just not necessarily at these brewing parameters. We have the baseline set here now, so check back probably early to mid summer for a review of how I think the tea is meant to be enjoyed.