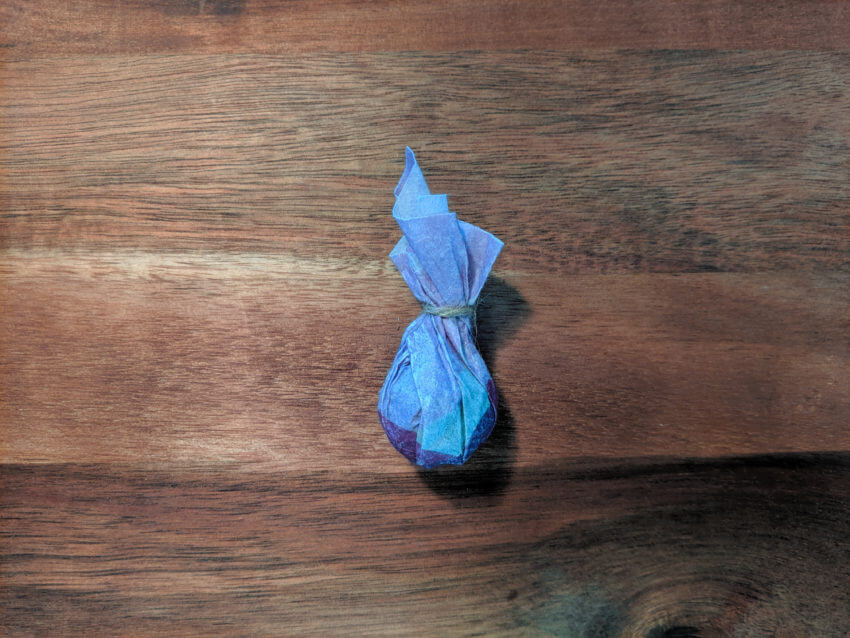 Bitterleaf Teas’ 2017 Plum Beauty is an interesting tea, in that they offer it in three different grades – bronze, silver, and gold. All three of these puerhs are made from Mengsong material with the difference between the three being both the age of the trees the leaves came from, as well as the overall quality. I would have liked to tried all three of these and done a comparison, but this order was in transit to me when I decided to start this blog, so I might grab samples of the other two next order to review.

The dry dragon ball doesn’t smell like much, just a light standard sheng aroma with not much to note. It’s a little bit fruity and there is a bit of a light dry earthy scent, but all around there isn’t much there. After just a few minutes of sitting in my warmed gaiwan the aroma starts to become quite powerful, and even more-so after a rinse. Plum Beauty has a strong fruity base, mainly stone fruit and raisin, with a light citrus scent in the upper range and a little earthiness.

Dragon balls can sometimes take a while to get going so I first warmed my gaiwan and let the little puerh ball sit in there for about five minutes. I then gave it a 15 second rinse, then let it sit in the gaiwan with the lid closed for about ten minutes. After this it looked like it was opening up nicely, so I continued on with my session. I am using 90°C water, my 130ml gaiwan, and infusions starting at 5 seconds and increasing by 5 each time. This ratio is a bit light on leaf for me, so I am not filling the gaiwan as full as I normally would, but I’m also not being super accurate and measuring it.

The tea comes in with a great herb-y, Jagermeister-like medicinal taste and a thick, oily body. The aftertaste is wonderful – it leaves you quickly and gives a bit of a pause before slowly creeping back with a nice sweetness and astringency that starts light and grows in intensity over a few minutes after your last sip. Throughout the first three infusions the tea gets thicker and more flavourful but it is mostly staying with the same flavour profile. I should also note that while the astringency might be on the high side for some people, I am not getting any bitterness and would call this a very smooth tea.

Infusions four through six are largely the same as the first few, but just “more.” Bigger flavour, thicker texture, but the taste is fairly consistent and straight forward. Sometimes I get a hint of stone fruit, sometimes there is a hint of fresh cut grass, but mostly it’s a strong herb and medicinal hit and sweetness. The astringency in the aftertaste was pretty strong already, but continues to grow – I’d recommend keeping a bottle of water by your side. I am starting to get a little bit of a cooling sensation on my breath after drinking, but it’s mild compared to some of the other teas I’ve had.

The body of this tea peaked at the seventh infusion and has begun to thin out, although if the seventh infusion was your first sip of this tea you would still likely remark on how thick it is. The astringency starts fading quickly here too and is almost totally gone by the ninth infusion, leaving just a silky and sweet aftertaste behind. Flavour, on the other hand, continues to build through the seventh and eighth infusion, then peaks around nine and ten and slowly fades away.

I think Plum Beauty could very much be a love or hate tea. If you’re not into a more medicinal type of puerh, then this probably isn’t for you. If astringency puts you off, then for now I would say, “stay away”. If what you value most is a puerh that changes with every infusion and takes you on a journey, then you’ll be bored. But, if you are a fan of big, strong flavours and you like a thick and interesting texture, then this will probably be your cup o’ tea. The big bonus for me is that Plum Beauty Gold comes in little, affordable dragon balls, so you can at least try out a higher end tea like this without breaking the bank or sticking with samples. At six bucks for a single dragon ball, it’s an easy buy-in and makes a good little add-on to your order. Then, if you’re into it, you can buy seven of them to bring the overall price-per-gram down a bit more.