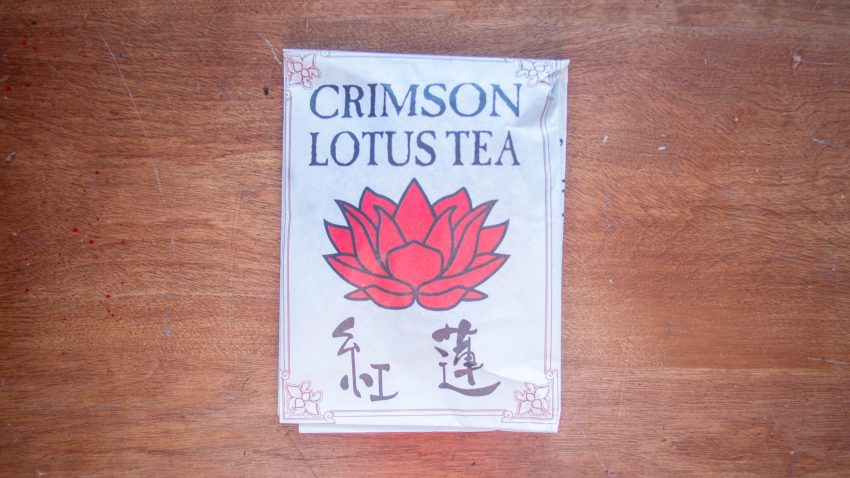 Crimson Lotus Tea’s 2019 Radio KXQM is a sheng puerh made from small arbour material that comes from a garden near the top of Kunlu Shan. In my limited experience, I have loved all the Kunlu sheng that I have tried and this is a tea I wanted to try last year, but I slept on hitting the order button and missed out. That was a mistake I don’t like to make twice, so I made sure to get a sample of this years production.

Radio KXQM seems to be a very dense tea with a fairly high compression. I eyeballed out a chunk I thought to be around my normal 3.5 grams, tossed it on the scale, and it weighed in at almost six grams! The dry leaves have a light fruity smell, apricot, plum, nothing out of the ordinary. After a rinse, the leaves take on an intense aroma, one that is big and in your face, but still gentle and comforting. Apple is a prominent note, mixed in with a bit of spice, the whole thing has an apple pie sort of vibe to it that makes it hard to keep my nose out of my gaiwan.

For this session I am using 3.85 grams of tea in my 55ml gaiwan, 90C water, and infusion times starting at five seconds and increasing by five each additional steeping.

There is lots to explore in this tea, even at the first infusion. It’s sweet and woody, syrupy thick and fruity, and as the liquor cools it becomes earthy. The finish is sweet and sits nicely in the midrange. The second steeping hits with a quick brightness that morphs into a dirty, earthy low end funk. It’s on the brink of being bitter but doesn’t ever get there. The aftertaste now is very long lasting but subtle. For the third infusion I have to admit I didn’t take much for note and just tossed it back. This tea is too good. My quick notes simply said “thick, creamy, blissful.”

Sweetness increases through infusion four, as does astringency. The taste in the forefront moves to a place that is very reminiscent of toffee for me. The aftertaste is now astoundingly long lasting. At first it’s all floral notes, then after I think it’s gone I press my tongue to the roof of my mouth and get a big hit of berries. The fifth infusion is marked by a powerful bitterness which overtakes all notes. This appears to have been a one off thing, and for the next steeping I get blueberry mixed with a tangy note and a citrus-y sour.

The seventh steeping takes another turn and is 100% floral with no other notes I can detect. Radio KXQM settles down after this though, and from the eighth infusion on the tea becomes more or less predictable. The main note for these late steeps is a sweet berry like one, with the earthy, woody-ness I saw at the beginning making a return underneath. This goes on strong for a few more steeps, with flavour peaking at the twelfth steeping before very quickly dying out and ending at the fourteenth.

For a handful of reasons, I’m not a big fan of little 100 gram cakes, but I’m going to have to suck it up and order a cake of Radio KXQM. For me, this tea is just too good to pass up on. This is one of the few handful of teas that I’ve drank and have had a difficult time reviewing because it’s way too easy to get lost in the drinking and forget to write notes. While I loved todays session through and through, I’m very much looking forward to the next one when I can drink it with my brain turned off.