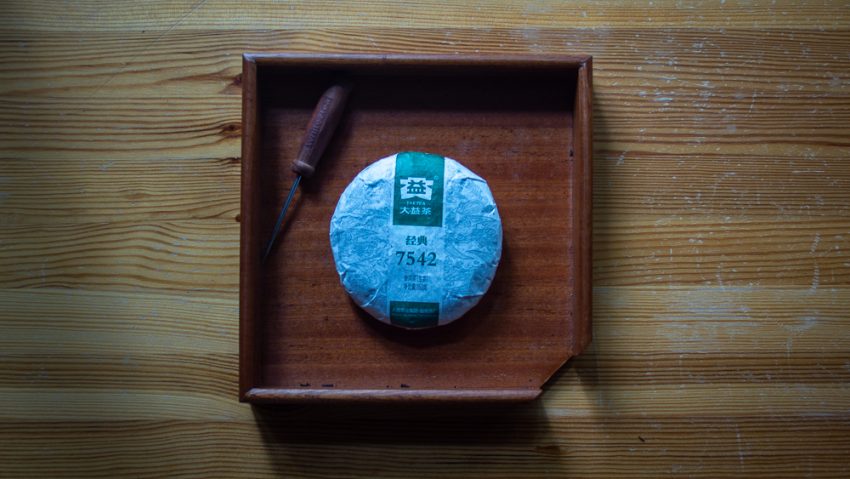 The factory puerh world is one that I’ve been meaning to explore for some time now, but there is so much out there that it’s a bit hard to know where to begin. To get things going, I decided to start with the classic Dayi 7542, which I bought from King Tea Mall. I wanted to get a general feeling for the 7542, so instead of buying whats considered to be the “best” of recent years, I simply grabbed two cakes, this one and a 2012 (more or less at random), to see how these taste young and also to watch them age. In the near future I’ll be picking up samples of some of the years people recommend as well as some properly aged samples.

The 7542 is on the heavier side of compression and it makes me wish I had a knife instead of a pick. The dry leaves have a bright tone to them that gives me the impression that this is going to be a strong tea. After a rinse the wet leaves have a plum aroma mixed with an acrid smokiness.

For this session I am using 3.9 grams of tea in my 55ml gaiwan, 90°C water and one rinse followed by a five second infusion with five seconds added for each additional steeping.

I was expecting this to be a harsh and unforgiving tea, so I’m pleasantly surprised that this isn’t the case – or at least not yet. The base of the tea is stone fruit with a lower-moderate amount of smoke and a light floral note. Bitterness grows from a light to medium level through the first few infusions, and the astringency starts out intense and moves to ridiculously high levels.

Infusions four and five feel powerful but the tasting notes are all muddled. All in all it has a generic tea type taste, but nothing really jumps out at me to take note of. With that said, it’s not unenjoyable. It somehow feels interesting, even if I can’t pin down why. At this point the level of astringency is insane and I step away from the session for a while to drink some water. When I return and continue with the sixth steeping, I find a much more easy going drink. There is a decrease in the harsher notes, an increase in sweetness, and a more clear stone fruit flavour. The aftertaste has been steadily growing through the session and by this time it’s long lasting and powerful. It starts out with a bitter punch then quickly turns into a sweetness that hangs on for many minutes after your last sip.

Infusions seven through ten follow a trend of becoming sweeter and easier drinking while still increasing in overall flavour and power. Sweet stone fruit is still the main note with a bitter kick on the back side, but all harshness of early steepings is gone. Flavour peaked between the tenth and eleventh infusions and very slowly faded out until the sixteenth.

While the tea did start out a bit harsh and painfully astringent, it wasn’t nearly as rough as I was expecting based on notes I have read from others on younger 7542s. Once it moved into the second half of the session it was actually a fairly enjoyable drink, albeit a basic one. This isn’t currently something I would want to have regularly, but I’m surprised at how drinkable it currently is and I am looking forward to watching it progress over the next handful of years.