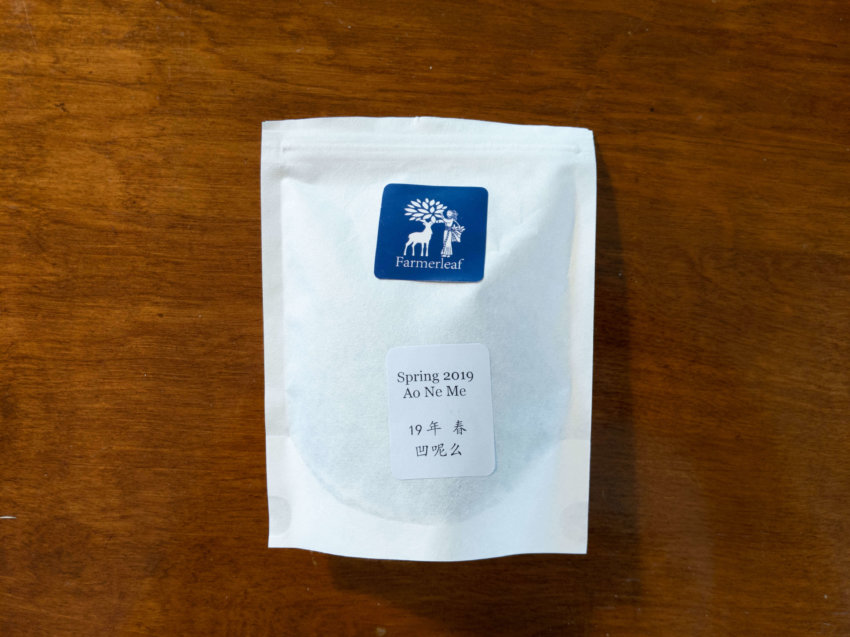 Farmerleaf is a vendor that I have had my eye on for a while, but I have just recently placed my first order from them. Of all the puerh vendors I follow, they were the first to put up 2019 teas so I decided it was a good time to jump in. I picked up samples of all the latest teas, with the exception of one. Their 2019 Ao Ne Me is made of ancient tree material from Ao Ne Me, a remote Ai Lao Shan village. This cake has been produced for the past few years and seems to be a very popular one, with the full cakes selling out in just ten days. Farmerleaf just recently pressed a second production using the same material though, so this should be making a return to the site in the near future.

Now, I am going to be reviewing some fresh 2019 productions in the near future but I feel like I should give a good disclaimer on all of them. Puerh undergoes massive and rapid changes within the first year after pressing, then continues to evolve at a slower rate after that. In my limited experience with new puerh (confirmed with much reading and talking with vendors) fresh puerh can come off as a bit dull and muted at the beginning. Or, it could be wild and unpredictable. Either way, however it tastes when you first try it isn’t how it will taste in a few weeks, or months, or years. Fresh puerh is fairly new to me and because of this I am really not somebody who should be considered an authority on judging how a puerh will age. I am simply taking a snapshot of how the tea is right now, and I will be checking in and updating down the line. Because these teas may not have had any time to settle outside of a little rest from shipping, I feel more comfortable referring to posts on these super fresh puerhs as an “early look” rather than a “review.”

Now, with that out of the way, let’s get on with it.

The reason I chose the Ao Ne Me to try first was because of how fragrant it is. After opening the sample pack you’re greeted with a deep, fruity and incredibly strong scent. After a rinse the leaves transform and take on the qualities of a fresh green tea. I’m getting a strong, nutty aroma, some fresh grass, a little seaweed, and in the background, a slight fruity sheng note.
My sample had a few small pieces together, but the majority of the leaves were broken up and loose. For this session I am using 4 grams of tea in my 55ml gaiwan, 90°C water, and one rinse followed by 5, 10, 15, 20, etc, infusions.

This tea seems to have two different characters, and it changes between them with each steeping. The taste of the first infusion lined up with the dry leaf smell. It is deep and rich and fruity with a good amount of spice bite. The second infusion is entirely different and mirrored the wet leaf smell. The taste is almost indistinguishable from a good green tea – it’s fresh, lively and super nutty. The third infusion is different again and I really don’t know what to make of it. I think it is an odd mix of the two flavour profiles of the previous infusions, but with an increased bitterness. The common thread that ties all these together is the mouthfeel and aftertaste. The aftertaste came on strong in the first infusion and doesn’t seem to increase, but is definitely holding. It’s immediately bitter then turns into a very long lasting sweetness. The mouthfeel is satisfyingly creamy and thick, and it remains consistent through each infusion as well.
I usually group my infusion notes together in threes, but the flavour stayed like this for the first five infusions, jumping back and forth.

In a weird way it’s kind of doing it for me. When the flavour is greener it tastes like a really high quality green tea. When it goes to the sheng side it tastes pretty great as well. It’s always good, so not knowing what will come next is fun.

From the sixth infusion on, 2019 Ao Ne Me becomes more predictable and it settles in to be what you’d expect from a sheng. It’s more mellow now than it started out as, but still nice, juicy and fruity. Black cherry is the main fruit note I am picking out, and bitterness grows right up to the end. Flavour took a large drop at the ninth infusion and I ended the session at the tenth.

As I said in the intro, it is much too early to make any form of conclusion or firm thoughts on this tea. This post is really just to lay some groundwork and document the early sessions so I can look back on it later and see what the progression looks like. I’ll be checking back in on this tea frequently and keeping notes for myself, and when I feel like it has leveled out a bit I’ll post again with an update.