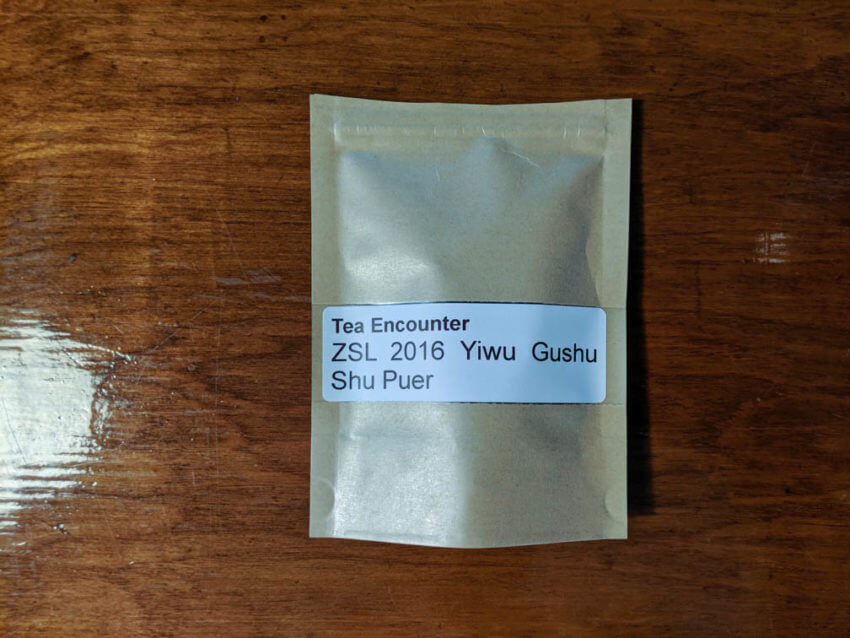 Today I am taking a look at a shou puerh from a new-to-me tea producer – 2016 Yiwu Gushu Shu from Zheng Si Long. I’ve been on a bit of a shou kick lately (more on that in a few weeks) and a high quality shou made from Yiwu material sounds like my jam, so I figured this would be a good introduction to ZSL.

You’ll probably see lots of Zheng Si Long reviews from me over the next while. All of these samples were generously given to me to try from Tiago over at Tea Encounter. As always, despite being free samples these teas will be reviewed honestly and fairly.

As far as shou goes, the dry leaves are fairly inoffensive smelling. The sample I received is very tightly compressed, it took some strength to break off a smaller chunk from the sample I got. After two rinses and a rest the leaves don’t look like they have even begun to come apart. I took a sip of the second rinse and it is weak but there are no off notes to it, so I’m going to start the session.
I am using 3.85 grams in my 55ml gaiwan with water at a full boil. Two rinses and a rest followed by a 5 second infusion with an additional 5 seconds for each infusion after.

First infusion is light but nice. Little bit of an earthy taste, little bit of molasses. The product description mentions a cooling aftertaste and surprisingly that’s already coming in strong, despite everything else being a bit weak. There is a strong menthol-like cooling feeling when you exhale after drinking and a good little tongue tingle. The second infusion comes in with a much deeper and richer flavour which increases again for the third. I probably could have triple rinsed this, but oh well. The description also mentions a rum taste and I get what they are saying. As the infusions go on the molasses taste gets strong and there is a very clear oak flavour. Put those together and you’re starting to get into rum territory, but personally I’d be more comfortable just saying “oak and molasses.” The texture of the tea is great, it’s thick and oily, and completely covers your mouth.

Through the middle section the woody, oak taste keeps increasing and I am getting very light notes of camphor. The flavour is very bold and strong by the fifth infusion, but it is mostly just what I have noted above – molasses, oak, light camphor, bit of earthy funk and a bit of sweetness. So there isn’t much depth here, but I’m loving the taste.

The general flavour of this tea stays the same and goes strong until the tenth infusion when it starts to decay, and by the thirteenth infusion I wasn’t getting much taste at all. At this point I did two more extra long infusions and was prepared to call it quits on my session. I didn’t want to toss my leaves yet though so I just set them aside and went about my day. Later in the afternoon I went back to make some more tea in a more absentminded fashion, without timing my infusion time, just sort of guessing at a medium length infusion. Much to my surprise, there seemed to still be some good life in the leaves, and I got maybe five or six more infusions out of them. I made a cup for my wife to try and she thought there was a distinct plum skin flavour. I had a sip and I don’t think I would have picked it out without looking for it, she was definitely right.

I had my session with this tea last week and as I am editing this post together I am getting a strong desire to go and have another session with it. I think that’s a pretty good indication of how I feel about it. It’s straight forward and to the point, but it’s smooth, has a pretty killer taste, truly impressive stamina, great texture and gives some nice sensory effects as you drink. You can’t really ask for too much more, in my opinion. The only thing it’s possibly lacking is depth, but as I may have said in some reviews before – not every tea needs to take you on a journey. Being a one trick pony isn’t a bad thing when that trick is exactly what you want. A 357 gram cake of this tea sells for $90 CAD. I haven’t drank enough shou in the same price range to do any direct comparisons and chime in on how I feel about it’s “value,” but if I had paid $90 for a cake of this I don’t think I would have been disappointed in any way.