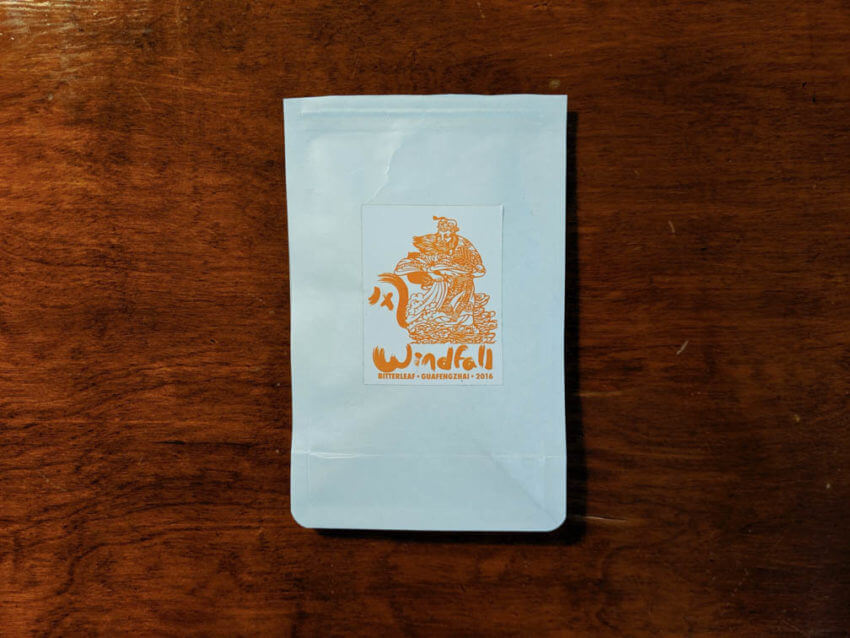 Bitterleaf Teas’ 2016 Windfall is a raw puerh made from Guafengzhai old tree autumn material. This is a very expensive region to source tea out of, so Bitterleaf is offering this cake as a way to dip your toes in and get the general character of the region, but without having to completely drain your bank account. Still, at $95 USD for a 200 gram cake it’s in what I would classify as the “upper midrange” for budget.

This tea came to me as a free sample from Bitterleaf with my last order but as always, I will review this tea honestly and fairly.

The sample seems to be more loosely compressed compared to other Bitterleaf puerhs, which are usually right in the middle for compression. It’s not completely fall apart loose, but on the looser side for sure. The dry leaves are fairly aromatic and smell floral, fruity and a bit earthy. After a rinse the wet leaves are much the same, with a nice strawberry scent to them.

For this session I am using 3.7 grams of tea in a 55ml gaiwan, 90°C water, and after a rinse infusions starting at 5 seconds and increasing by 5 each infusion.

Windfall’s flavour starts out a little bit faint, but still savoury, with a thicker mouthfeel than I was expecting. There is a good amount of depth to the flavour, but it’s all around light. It’s a touch earthy, a tad floral, a smidgen sweet and a wee bit spicy. It’s all around delicious, but soft. The strongest part of the tea so far is the aftertaste, which is outstanding. The light spice taste stays right at the back of your throat and grows over several minutes. It’s been nine or ten minutes since my last sip and I’ve had a few drinks of water, but I still have a very clear clove and black pepper taste in the back of my throat, and a nicely tingling tongue.

Astringency begins to grow, but it’s the good kind that makes your mouth water. The savoury-ness and fruitiness increase through the mid section, and the fruit note is slowly becoming a clear apricot taste. Through infusions four and five the light floral notes fade and are gone by the sixth infusion. Occasionally I get some mineral notes, but these are pretty far in the back as of right now. For the session so far I would say this is on medium-dark side for general flavour profile, but the sixth infusion was suddenly very bright and crisp, which came out of nowhere. I haven’t waited long enough between infusions to see if the aftertaste is increasing in length, but it’s safe to say that it’s still incredibly long lived.

The seventh and eighth infusions continue on with the brightness of the sixth infusion, and I am getting an orange-like, citrus taste. Right after these new flavours came in, the tea takes a sudden drop at the eight infusion and the session is done at the tenth.

Windfall is a fine tea, but it’s the first Bitterleaf puerh that I have tried and didn’t feel the need to own, although I think it hits the mark of what it’s supposed to be and may still appeal to some drinkers. Fall teas are known to be much softer and more gentle and often offer less complexity when compared to their spring counterparts. So, the softness this wasn’t a surprise to me. Some people might desire a softer puerh, and others might want to try a tea from a more expensive region but not pay spring prices, so for those people this tea could be a good fit in their pumidor. For me, I would like at least just a little bit more kick.