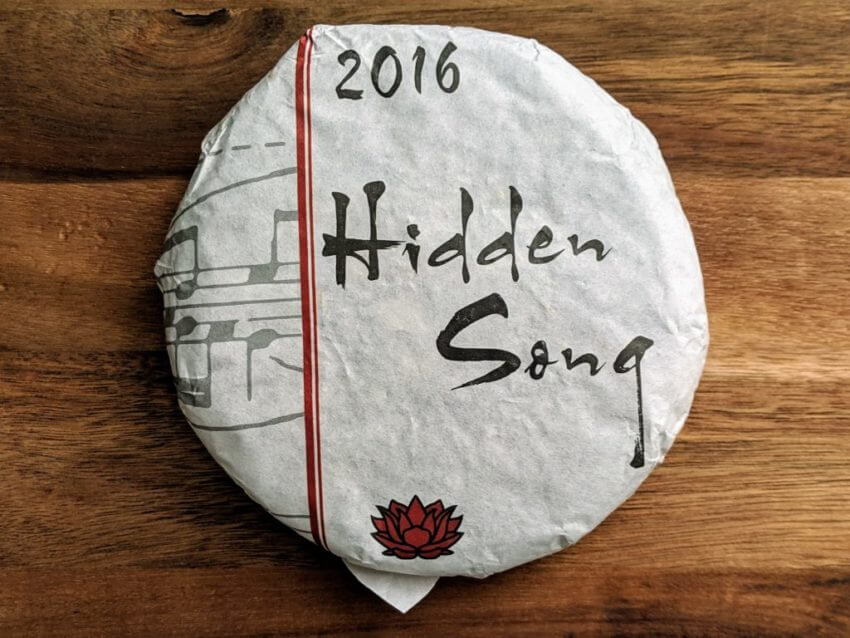 I have to admit, what first attracted me to Crimson Lotus Tea’s 2016 Hidden Song was the mystery of the wrapper. In case you haven’t checked it out, the wrapper has a small piece of sheet music on it and if you guess the song correctly, Crimson Lotus sends you a tong of this for free. As a musician married to another musician, this seemed like it should be easy. I recorded my wife playing it on piano and over the few weeks I was waiting for the cake to rest I played the song for pretty well everybody I knew but unfortunately have come up blank. So if I were to judge this cake by it’s ability to magically turn into more free cakes, it would be a massive let down. *sigh*

Fortunately, the cake has more to offer than just a contest.

I have tried two other Crimson Lotus cakes in the past and really enjoyed both of them, so blindly picking up a cake for a chance at a free tong wasn’t really that big of a risk.

The cake seems pretty loosely compressed, it was very easy to break off a small 3.5g chunk, which was almost entirely broken up by the end of the second infusion. The dry leaves don’t have too much of an aroma to them, and the wet leaves smell earthy, fruity and a bit acidic.

The first infusions here are a bit thin and weak, but it has a good spice taste to it. Up front it is mostly green vegetal with the spice hit, and it has a nice sweet aftertaste. There is no bitterness or astringency at all, and I would say it’s very clean tasting.

Still not thickening up too much, so at this point I’d say Hidden Song is just a thinner tea. No high notes have shown up, but it’s not super deep and dark either, it’s kind of floating in the mid-depth of puerhs. Not too much is changing in the taste, but it’s generally more robust than it started out. It’s really nice and smooth, exceptionally drinkable. You can push the infusion times and not get any unpleasantness and no real bitterness comes forward. The aftertaste is becoming longer and longer, and some smokiness peaks out from time to time.

For the beginning of this chunk it was more of the same. Around the tenth it started to drop off, so I bumped up temperature and infusion time to try to drag out as much as I can from the tea. Most of the up front spice taste has faded away and some floral notes are moving in, which I wasn’t getting even a little bit of earlier in the session. Spice is still there in the aftertaste, which seems to go on forever.

I really enjoyed my session with Crimson Lotus’ Hidden Song and look forward to the next one. I would place it on the higher end of daily drinkers. It’s not a big, deep, complex session, but it certainly hits the spot.